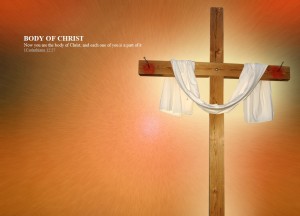 We believe the Scriptures teach that there is one, and only one, living and true God, an infinite, intelligent Spirit, whose name is Jehovah, the Maker and Supreme Ruler of heaven and earth; inexpressibly glorious in holiness, and worthy of all possible honor confidence and love; that in the unity of the Godhead there are three persons, the Father, the Son, and the Holy Ghost; equal in every divine perfection, and executing distinct but harmonious offices in the great work of redemption

We believe in the deity of Christ; His virgin birth; His shed blood for atonement; His bodily resurrection; His ascension into Heaven there to be our Intercessor; His lordship over all creation.

We believe that the Holy Spirit convicts of sin, makes believers children of God through the new birth, assures them of Heaven, and by His indwelling enables Christians to live a godly life.

We believe that all men are sinners by nature and choice, sinful and lost, and have within themselves no possible means of salvation without Christ.

We believe in salvation by grace through faith; that salvation is the free gift of God, not by any virtue or works of man, but received only by personal faith in the Lord Jesus Christ; and all true believers possess the gift of eternal life, a perfect righteousness, sonship in the family of God, and the divine guarantee that they shall never perish.

We believe in the existence of Satan, the deceiver and god of this present world; that he was defeated and judged at the cross, and therefore his final doom is certain.

We believe in the second coming of Christ; the time being unrevealed but always imminent; that when He comes He will first by resurrection of the dead and the translation of the living remove from the earth His waiting church; then pour out the righteous judgments of God upon the unbelieving world, afterwards descend with His church and establish His glorious and literal kingdom over all the nations for a thousand years.

We believe that the spirits of the saved at death go immediately to be with Christ in Heaven; that at His second coming their works will be judged and rewards determined; that the spirits of the unsaved at death descend immediately into Hell until the final day of judgment, at which time their bodies shall be raised from the grave, judged, and cast into the lake of fire, the place of final and everlasting punishment.

We believe in the priesthood of all believers, that Christ is our Great High Priest and through Him every born-again person has direct access into God’s presence without the need of a human priest; that the believer has the right and responsibility personally to study and interpret the Scriptures guided by the Holy Spirit.

We believe that a New Testament church is an organized body of born-again baptized believers practicing scriptural ordinances and actively engaged in fulfilling the Great Commission.

We believe in the separation of church and state; that God has ordained both, and has delegated authority to each; the authority of one must not interfere with the other; however, this does not mean that the state is to be non-religious nor does it mean that the church and its members may not be involved in the political processes of this nation.

We believe the officers of the church are Pastors and Deacons. In Scripture the Pastor is also referred to as an Elder. The two terms describe the same office.

We believe the Scriptures teach that Christian baptism is the immersion in water of a believer, to show forth in a solemn and beautiful emblem, our faith in the crucified, buried, and risen Savior, with its effect, in our death to sin and resurrection to a new life; that it is prerequisite to the privileges of a church relation; and to the Lord’s Supper, in which the members of the church, by the sacred use of bread and wine, are to commemorate together the dying love of Christ.